Welcome to the PBSC City Series, our original content covering different cities around the world that partner with us for their shared micromobility needs. Join us as we deep dive into how our technology and innovation has empowered the success of their bike-sharing systems.

With 3.38 million people, Dubai is a modern, connected smart city in the United Arab Emirates with truly impressive infrastructures that continue to grow at a rapid pace.

In February 2020, PBSC in partnership with Careem launched a massive new electric bike-share solution that gave this ultra-modern desert metropolis another claim to fame: first large-scale bike-share system in the Middle East. PBSC developed this customized, sustainable urban bike-share solution to perfectly respond to the requirements of Dubai’s Roads and Transport Authority (RTA). More than a year later, the Careem BIKE system is quite the success, with more than 800,000 rides taken! 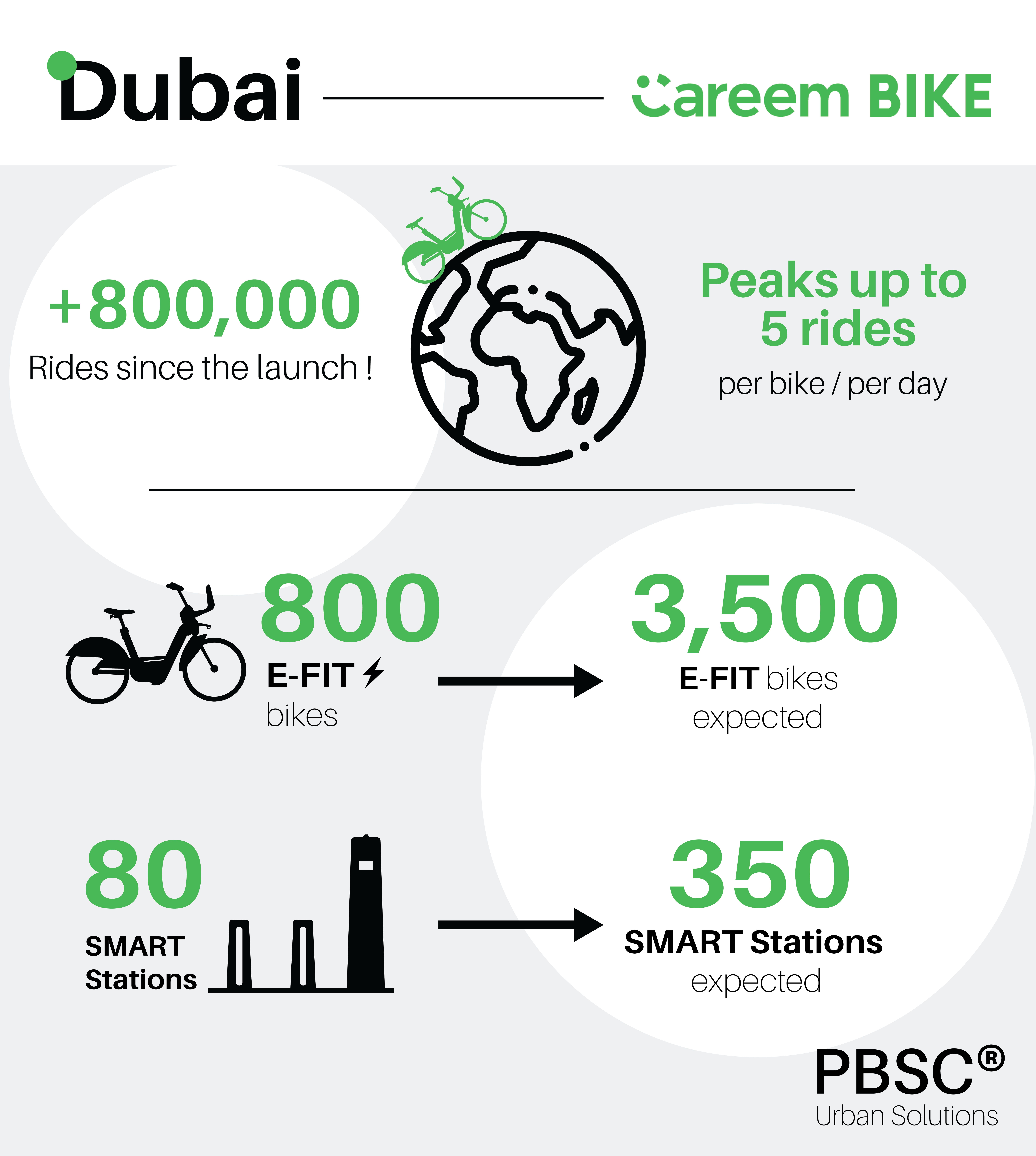 With extreme desert heat and winds, particularly during the summer season, Dubai’s climate and mobility infrastructure demanded extra-special consideration when developing its urban bike-share solution. For example, the RTA’s micromobility vision includes building a network of dedicated cycling lanes. In this city that is passionate about its car culture, such a project helps make bike-share an idea to embrace.

Choosing the right e-bike for Dubai’s climate and infrastructure was key. PBSC’s E-FIT (a fleet of 800 E-FITS, to be exact) is an electric pedal-assist bike, thus cyclists expend less energy to pedal; the motor does the work. (Needless to say, delightful in desert heat.) PBSC’s multifunctional smart stations are equally innovative, charging up e-bikes directly at the docking point while securing the E-FITs and having a structured and organized network.

When it was time to launch the system, 80 smart stations were implemented throughout Dubai in just two weeks, a fast and efficient rollout that enabled 800 E-FIT to be deployed and available for use as of the system’s very first day. A whirlwind of precision, this immense operation was masterfully managed in collaboration with Careem BIKE.

The system was immediately popular; with +800,000 rides and peaks up to 5 rides per bike a day, impressive numbers for the system’s very first year of operations.

Another secret to its success was integrating PBSC’s technology into Careem’s multi-purpose solution. By interfacing PBSC’s system with Careem’s database, the bike-sharing service became instantly available to a very wide audience, as illustrated by its diverse user profiles. Careem BIKE users are extremely varied, with occasional users, and its solid base of regulars keeps steadily growing. The system is available through the dedicated Careem BIKE app that PBSC has developed to maintain a smooth user experience.

PBSC is proud to be associated with Careem, recipient of the Sustainability Company of the Year at the 2020 Gulf Business Awards, and to share in the happiness of Dubai’s electric urban bike-share solution — one that seems well on its way to achieving its projections of 3500 bikes and 350 smart stations!

An ICONIC solution for a charming French city – Clermont-Ferrand