Bike Share Toronto celebrates over a decade of success, as they continue to achieve new milestones and plan for electric expansions.

Among our earliest and longest-standing PBSC bike share success stories is the tale of the Bike Share Toronto system, which celebrated its 10th anniversary in April of 2021! The widely popular bike share program is owned by the city and the Toronto Parking Authority (TPA), with the latter being in charge of the system’s ongoing development by managing and growing the system on behalf of the Canadian metropolis. 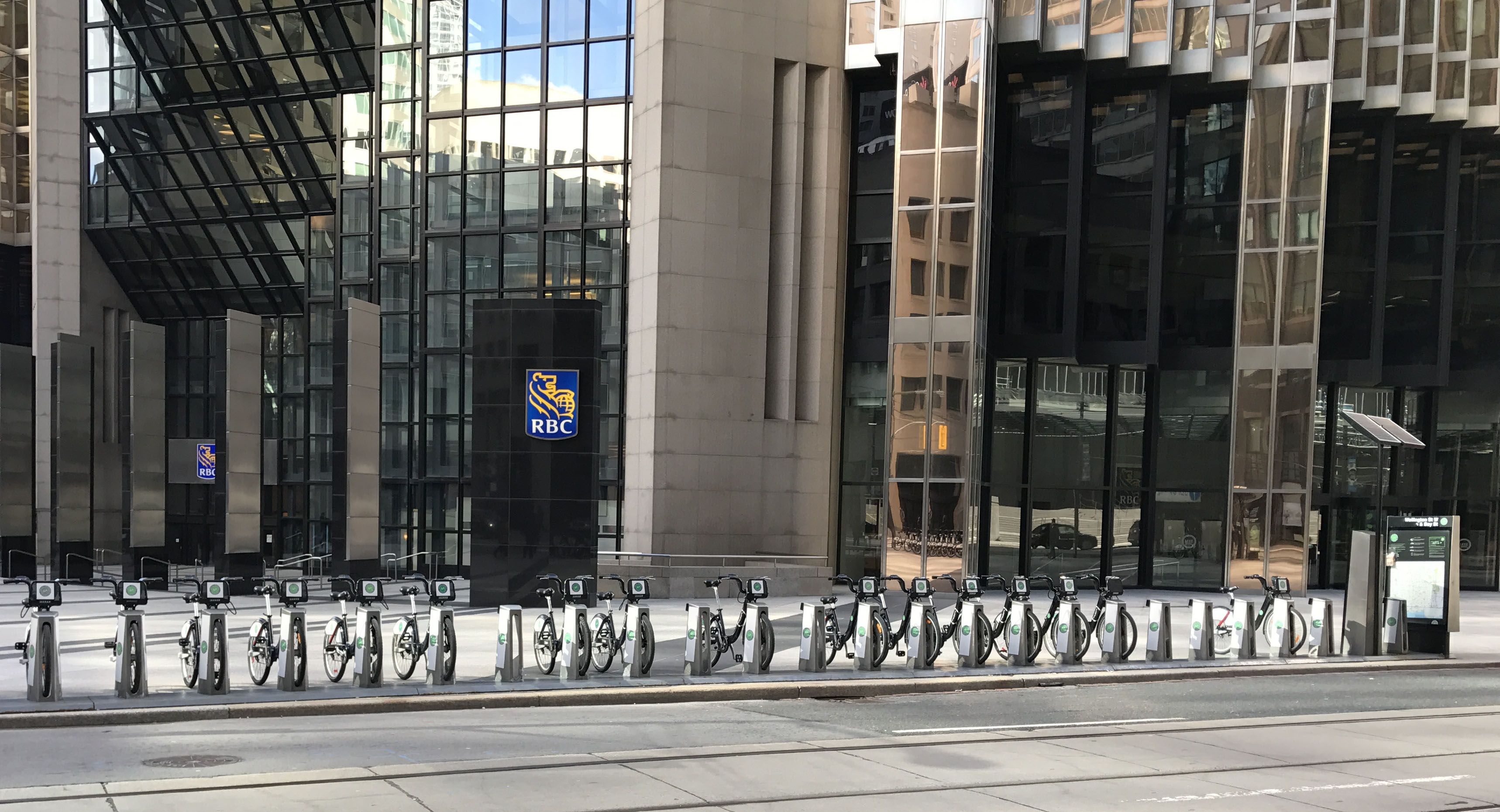 Bike Share Toronto (known as BST for short) has been operated by our partners at Shift Transit since 2017, and since seen a tremendous increase in popularity as cycling culture continues to have a growing impact on the city. This beloved city bike sharing system features PBSC’s ICONIC and E-FIT bikes and Smart Stations, as well as our state-of-the-art PBSC App.

Bike Share Toronto was born in 2011, in the city’s downtown area, with a rollout of 1,000 of our trusted ICONIC bikes and 80 Smart Stations. More than a decade later, the bike share system is all grown up, with 6,852 bikes and e-bikes in operation, as well as 625 PBSC Smart Stations (for a grand total of 12,000 docking points), serving locals and tourists in 20 of Toronto’s 25 wards.

As indicated by the more than 12.5 million trips taken by a million happy cyclists during the system’s first ten years of operations (according to Shift Transit), this city bike share system has become a delightful ingredient of the vibrant, active culture of Canada’s booming metropolis. Embraced by the city’s urbanites as intrinsic to their efficient, healthy, and smart way of life, Bike Share Toronto is part of the city’s cosmopolitan identity and lifestyle.

Here is a summary of the survey results: 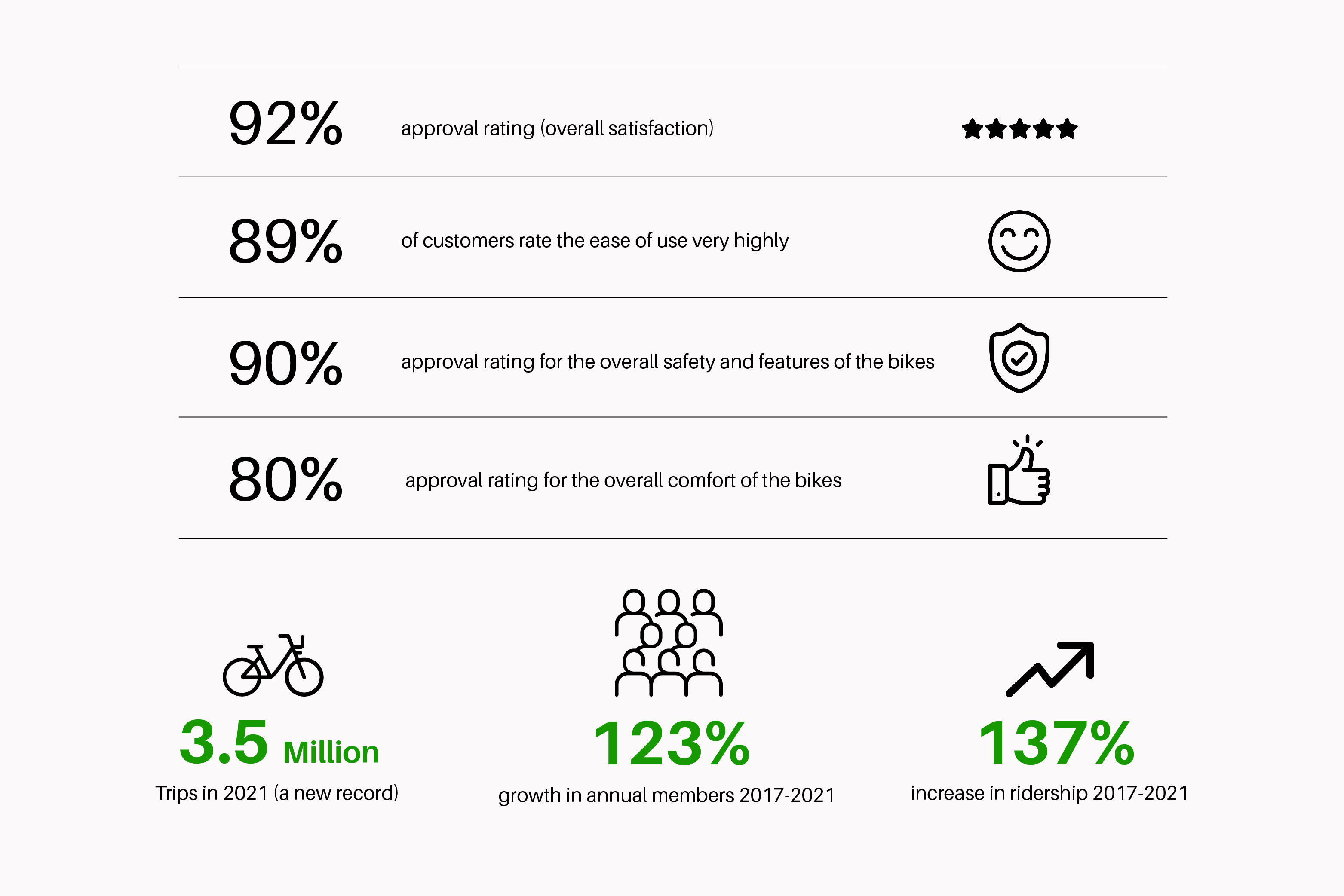 Study conducted by Metrolinx in the summer of 2020 - shared publicly at the May 12, 2021 Board Meeting with the TPA.

“We’re very proud of the tremendous positive impact we’re seeing with the Bike Share Toronto program. During the last survey, the system had a 92% overall approval rating, which is incredible and we’re proud to be a part of. The city’s bike share program will be key to providing a sustainable first and last mile option with public transit, in support of Toronto’s ambitious climate neutrality goals. We couldn’t be more excited to start our 4-year growth plan, to add more bikes and e-bikes across 25 wards.”

Over a decade of bike-sharing in Canada’s biggest metropolis

As one of the top bike sharing networks in North America, and one of the first bike share systems in all of Canada (alongside BIXI Montreal) , Bike Share Toronto keeps evolving with the times. Its steady growth matches the energetic pulse of the modern metropolis it calls home, keeping locals active while meeting their transit needs through a shared micromobility solution that’s sustainable and customized to the city’s transit infrastructure.

Toronto is Canada’s biggest city with a bustling population of 2.9 million, recognized for its diversity, cutting-edge technology and professional landscape. Considering the city’s innovative and inclusive personality, it only makes sense that its Bike Share Toronto system is ahead of the curve in usage and popularity. Acknowledging the known benefits of shared micromobility and especially electric bikes as an alternative and sustainable form of transportation, Ontario’s leading hub actively promotes cycling advocacy and new initiatives to increase accessibility for all, always with that modern flair for which Toronto is known.

For example, in the summer of 2020, Bike Share Toronto expanded yet again, marking the system’s sixth growth spurt (and its third expansion in 3 years). As announced by Mayor John Tory and the Toronto Parking Authority at the time, 1,850 bikes (including pedal-assist electric bikes),160 bike sharing stations, and 3,615 docking points were deployed during this recent phase! The following year, Bike Share Toronto was thrilled to announce its busiest and most successful year thus far, with more than 3 million trips taken in 2021.

A decade of happiness marked by an e-bike pilot project 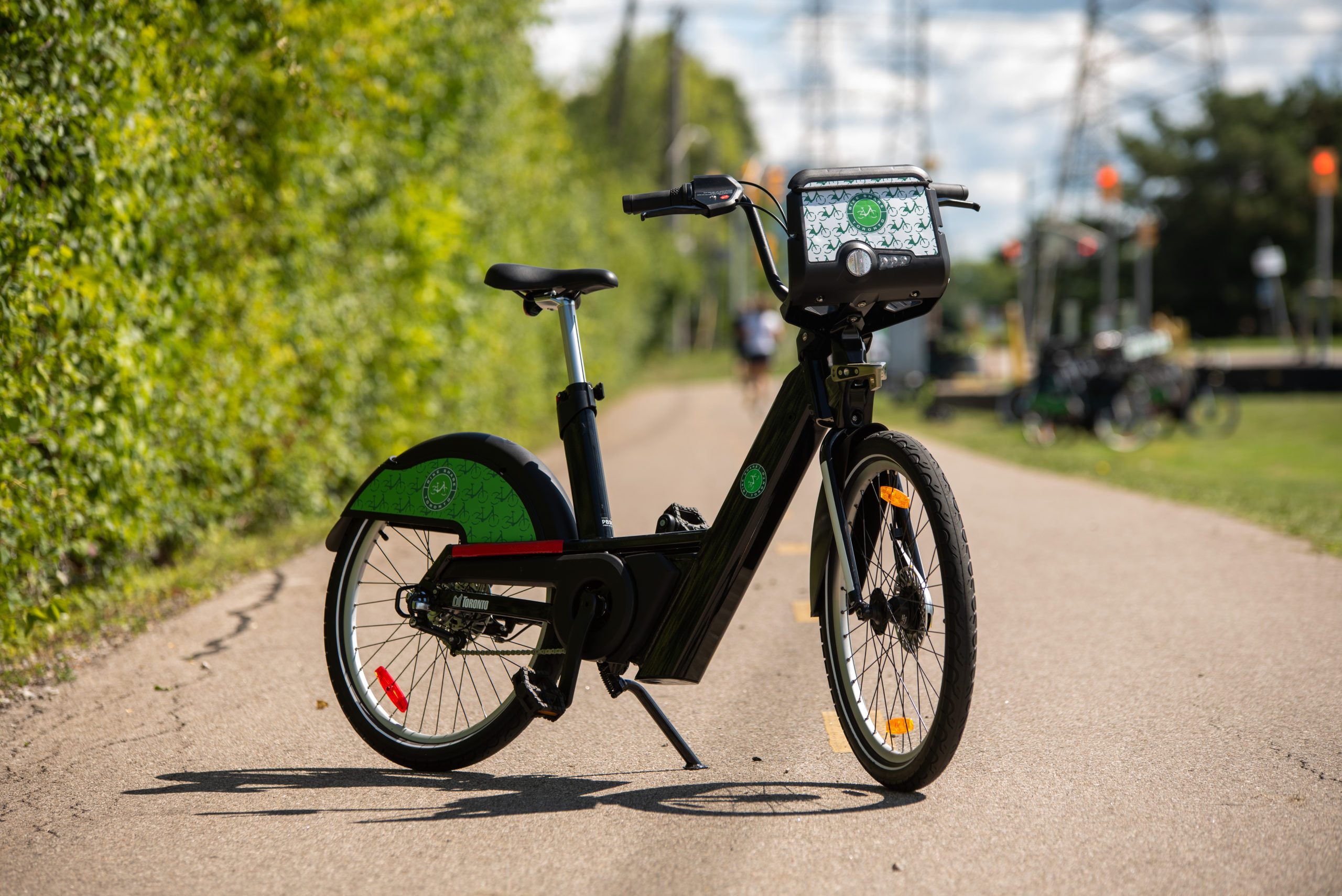 In a successful pilot project, this latest expansion added the power of electric bike share to the fleet with 300 of our lively E-FIT pedal-assist e-bikes and 10 charging Smart Stations, where the e-bikes can be docked and charged at the same point as regular bicycles, providing unparalleled convenience to users and operators alike. Lightweight and smooth, the E-FIT is engineered with superb ergonomic technology. Its battery can last up to 70 kilometres before its time to dock and charge. These sleek e-bikes are perfect for swift commutes around town as cyclists using the Toronto Bike Share program can accelerate up to 25 kilometres per hour with 3 speeds to choose from. It’s no wonder our E-FITs are coveted among active Torontonians, who embrace shared e-bikes as a micromobility must.

At PBSC, we're quite fond of saying, “active people, smart cities, healthy planet!” Toronto takes this credo to heart, especially when it comes to keeping urbanites safely active throughout the COVID pandemic and beyond. As such, in 2020 the city kicked off its ActiveTO project and some streets became off limits to car traffic and all-in for walking and biking. As reported by the CBC, many of these changes will be permanently implemented and in the next few years, 100 more kilometres of bike paths are on the way. And according to our friends at Bike Share Toronto, some 40 kilometres of new bike paths have already been established. 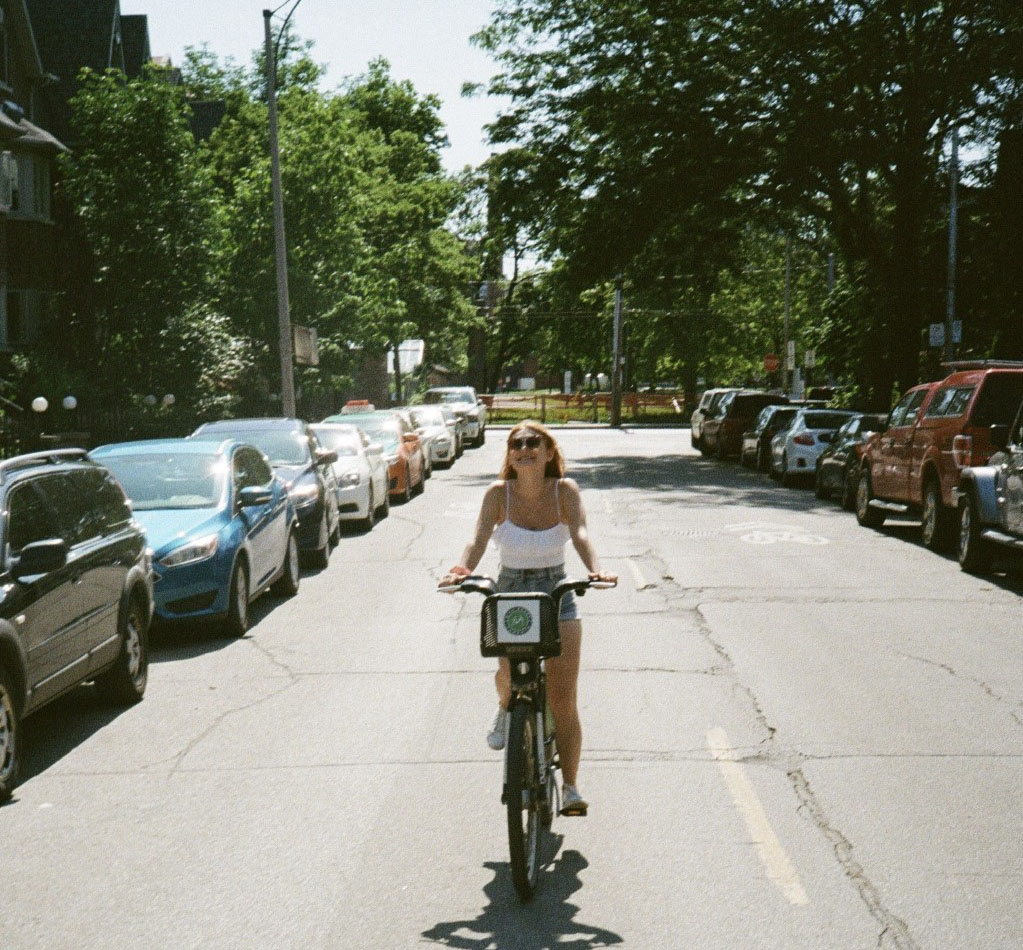 Toronto’s bike share program and its expansion, under the Toronto Parking Authority, has become an integral part of the city’s transit network and sustainable transportation goals. TransformTO, the Ontarian metropolis’s net zero strategy that was adopted by Toronto City Council in late 2021, has set ambitious climate targets for the upcoming years. In terms of transportation, Toronto expects that “75 per cent of school/work trips under 5km are walked, biked or by transit” by 2030. It is becoming clear that cycling culture, and especially bike sharing, are necessary as a first and last mile option for the city to achieve its goals.

To align with their transportation and climate goals, the Toronto Parking Authority and the city have recently announced an aggressive 4-year growth plan. They will be expanding their fleet to have a total number of 10,000 bikes, including 2,000 e-bikes, and expect to have a network of 1,000 docking and charging Smart Stations throughout Toronto’s 25 wards by 2025.

"We are thrilled to learn of TPA's latest growth plans, marking the 5th time Shift Transit will oversee the expansion of the Bike Share Toronto system. By working hand-in-hand with our partners at TPA and PBSC, we have created a world-class bikeshare system that is a model for cities across the globe. And while we've shattered every major usage record in the past few years, the latest expansion plans will catapult the program to new levels of success!"

To learn more about PBSC's global impact, smart cities, or to get industry news and updates on technologies and events, sign up for the PBSC newsletter today.

Interested in becoming a local operator or establishing bike sharing in your city?
Contact us at info@pbsc.com