How the Pandemic Increased Demand for Alternative Transportation

In a post-pandemic world, the Micromobility industry as a whole and especially Bike use have seen a tremendous boom. In April of this year, Bicycle Retailer reported that “Shimano sales in its bike division were up 76.3% in the first quarter, compared to the same period last year; operating income in the division was up 170%.” This comes as no surprise as Covid caused a massive shift in the way people in cities across the globe think about travel. In a study conducted by McKinsey Center for Future Mobility, it was revealed that ‘reduction of risk of infection’ overtook pre-Covid considerations for mode of travel in the past year. This had a large impact on public-transit use in major cities around the world (we’re looking at a reported 70 to 90 percent decrease in ridership). What does that mean for the future of mobility? Well, as Cycling Industries Europe, Expert Group on Bike Share, reports, citizens in many leading European cities chose to take advantage of their bikes to move around, especially in urban areas. A phenomenon that wasn’t just reserved to European cities, as countries all over the world quickly started to take notice and experiment with more “Slow Streets” (usually busy streets closed off to vehicular traffic and reserved for pedestrians and cyclists). 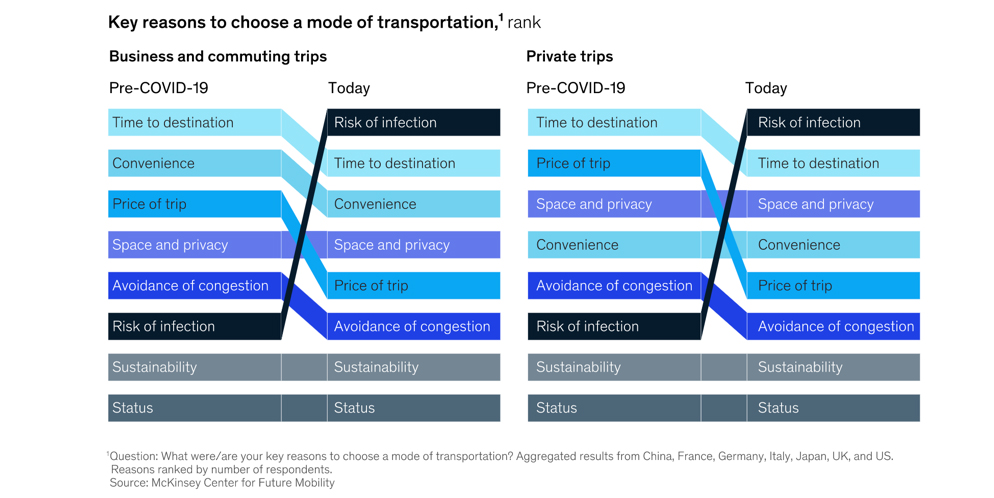 Based on the same McKinsey survey from earlier, almost a whopping 70% of city mobility users living in the U.S., U.K., Germany, France, Italy and Japan answered that they would choose to walk or take a bike in their weekly travels even in a post-pandemic world.

What Does It Mean for the Future of Sustainable Transportation & Bike Share?

As cities around the world are slowly heading back to a new normal, there is a growing opportunity to rethink the way we think about travel. Experiments with slow streets and increased bike lanes were popular during this past year, where people in major urban cities were able to take advantage of remote work and cut down on their travel by car.

Meanwhile, urban cities with micromobility programs like bike share and scooter share were able to provide their inhabitants with normally expensive bikes, e-bikes and scooters at minimal costs. It encouraged people to take advantage of healthier, cleaner and more active modes of transportation to get around and to get exercise regularly. Cities with modernized and cyclist-friendly urban infrastructures have already put active modes of transportation to the test with impressive results for decision makers and city planners.

In a 2017 study, the city of Stockholm, Sweden, compared several methods of travel, including driving, taking public transit and biking on two types of routes. On one route, the cyclist (using an e-bike) actually beat both the driver and the public transport traveller to the destination. On the second route, the public transport came first, with the e-bike second. The study clearly demonstrated that, “Walking or cycling can be just as fast as travelling by car or public transport, as long as the right conditions and infrastructure are in place”.

"We call for every city to have its own bike sharing scheme. Imagine the impact Europe-wide, not only on air quality, congestion and health but also in bringing new local jobs and boost for the economy. Bike sharing is fast to deploy and can be a real game-changer encouraging more people to choose bikes over cars”, says Laura Fried, CIE Policy Director.

There is an urgent need for urban cities with dense populations to move away from car-centric transport. According to CIE, it will not be possible to reach the EU’s current objective to cut transport emissions across the continent by 90% come 2050 without an impactful plan that involves a move towards active mobility.

The feeling is shared across the board when it comes to European bike share operators and service providers. In addition to PBSC Urban Solutions, CIE’s campaign counts a list of minor to major players in the Micromobility industry as members of the campaign.

Lauha Fried concluded: “Imagine the impact Europe-wide, not only on air quality, congestion and health but also in bringing new local jobs and boost for the economy. Bike sharing is fast to deploy and can be a real game-changer encouraging more people to choose bikes over cars.”

Active modes of transport, such as micromobility and especially bike share, play an undoubtedly significant role in accelerating the planet’s shift to green and zero emission mobility. The next phase is in the hands of the major urban cities in Europe, Asia, North America, Latin America, the Middle East, and everywhere else in the world. We must, as a whole, start to prioritize citizens with greener, affordable, accessible and healthier alternatives to their current mobility options – to create Smart Cities. Bike Share is key in achieving that mission and creating a sustainable future for generations to come.

Are you looking to become a local operator or bring Bike Share to your city?