The Future of Transportation is Micromobility.
The Future is Electric.

It’s the idea that cities around the world are changing the way they think about transportation in urban areas. Bike share isn’t a new concept - in fact, the very first bike sharing scheme was introduced all the way back in 1965 in Amsterdam. Have you ever heard the expression, it’s not where we’ve been, it’s where we’re going? Well, bike share has since seen its fair share of changes as it has evolved into a global solution to the need for affordable, accessible transportation options that also happen to be eco-friendly. The latest leap for the rapidly evolving industry is electric bike sharing systems.

Barcelona, Montreal and Dubai are just a few of the cities where electric bike share is booming today. As cities around the world are faced with the urgency of climate change and increasingly dire reports on the state of carbon emissions in areas with high urban populations, there has been a steady move towards the electrification of short distance travel.

Electric bicycles are efficient, accessible, and eco-friendly options that cities can opt to integrate with their local transit systems. But most importantly, they’re fun and easy to use. In 2020, the electrically powered segment of the micromobility industry contributed to more than 3/4ths of the worldwide market share. Why? The answer is fast user adoption. E-bikes allow users to get around quickly and without breaking a sweat with a motor that enables pedal assisted cycling.

Even more, electric bike sharing schemes provide urbanites with a smooth user experience. It’s as simple as grabbing a bike at one docking and charging point and returning your bike to any Smart Station near your destination. As today’s Smart Cities are rapidly heading towards becoming 15-minute cities, the idea is that you will eventually be able to find a station to take and drop off your bike in most areas that are frequently travelled to (thus being able to get to and from anywhere you need to go in 15 minutes).

PBSC Urban Solutions, with over a decade of experience in the world of Bike Share, has since seen their electric bike sharing scheme in Barcelona become a rapid hit. Today, the city’s Bicing bike sharing program, which mixes PBSC e-bikes with its fleet of regular bikes, is one of the world’s biggest success stories for bike share. In 2020 alone, the city recorded a whopping 12+ million trips from users.

PBSC’s latest and most innovative electric bike offering is the sleek, ergonomic E-FIT, which is equipped with a 250W central motor that gives users a smooth ride from point A to point B. The E-FIT has since become a popular addition in cities like Montreal, which has been operating its BIXI bike share program with PBSC bikes since 2008. Montreal has since evolved its fleet to include 1900 E-FIT electric bikes that you can spot on its streets today.

Dubai, in the United Arab Emirates (UAE) is one of the most recent cities to join the likes of Barcelona and Montreal’s success in sustainable mobility. The Middle East’s top ride-hailing company, Careem (partnered with the city’s Roads and Transport Authority), operates the city’s large-scale e-bike scheme. As of today, Dubai is equipped with 800 E-FIT bikes and 80 Smart Stations, which is expected to grow in the coming years.

As of 2021, PBSC e-bikes are available in more than 15 cities around the world - including Europe, U.S., Canada, Latin America and U.A.E. In total, you can find over 8000 e-bikes in major cities, such as Toronto, Monaco, and Dubai, among many. 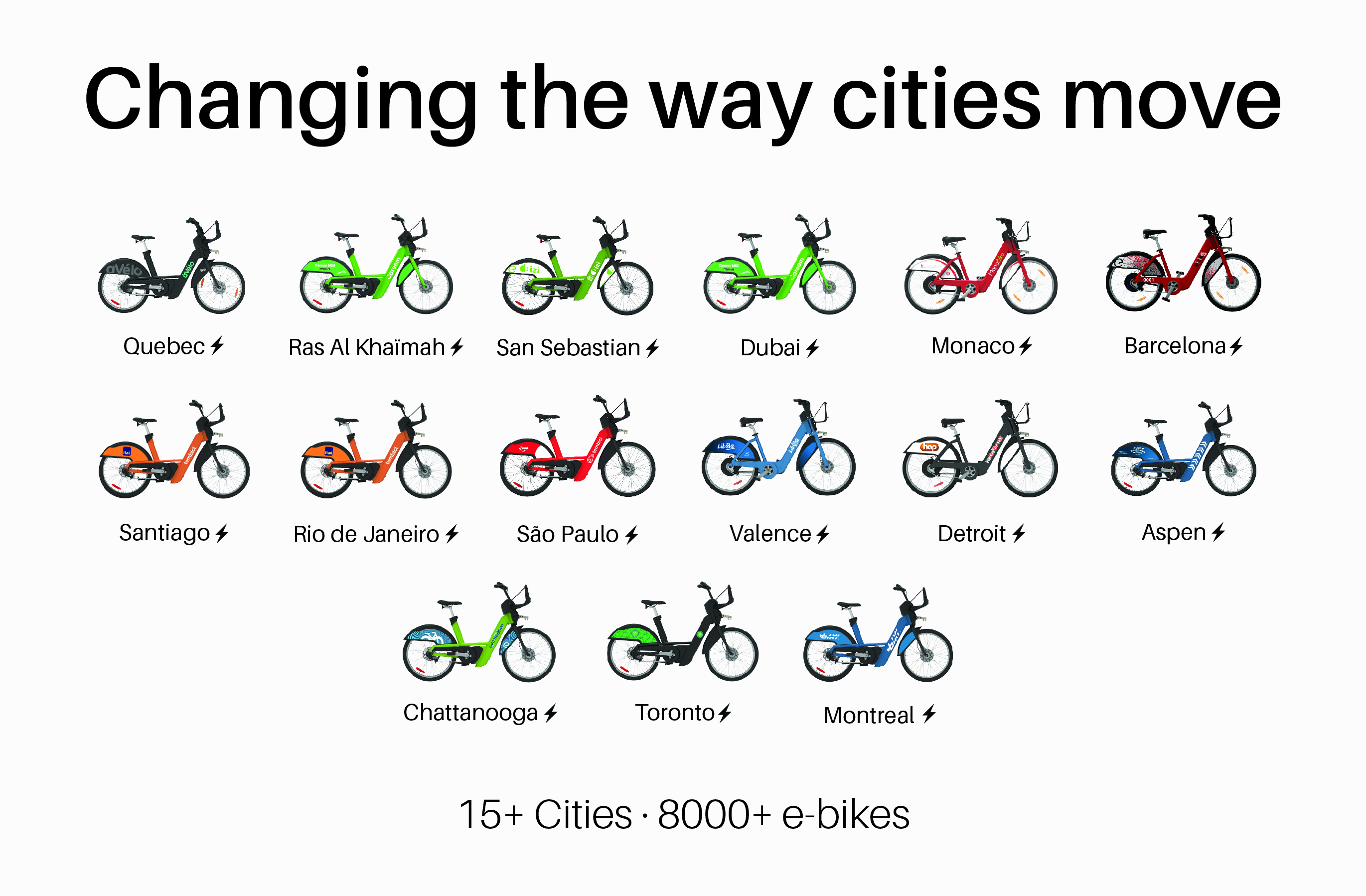 PBSC Urban Solutions is the world’s largest turnkey solutions supplier when it comes to starting a bike share program. With four unique bike share experiences to choose from, including both regular and electric bicycles (ICONIC and FIT & BOOST and E-FIT), PBSC caters to each city’s specifications and needs. The true advantage for cities that implement or transition to a new electric bike share scheme is that they have access to an entire ecosystem of micromobility technologies and a large team of industry experts. 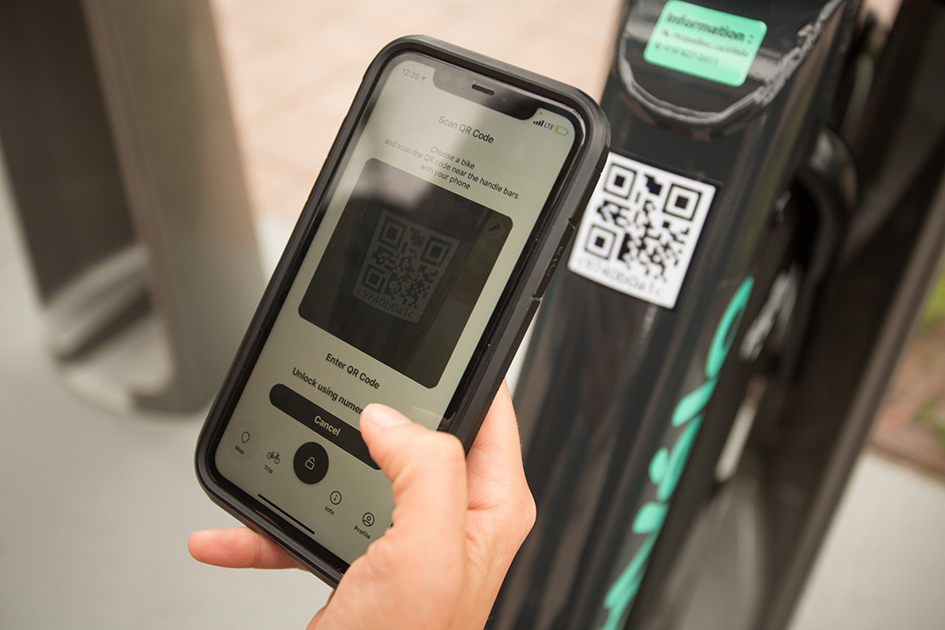 PBSC Smart Stations are world-renowned for their secure and proven docking and charging capabilities for both mechanical and electric bikes. Multifunctional, grid-powered e-stations provide an intelligent, connected kiosk that will communicate with the system’s back-end so users can grab a bike from its dock with smartphones or smartcards. The stations will automatically start charging e-bikes as soon as they’re docked and let the system know each one’s status, enabling local operators to always be always aware of each bike’s status.

Most importantly, the PBSC team is known for innovating in the industry to solve tomorrow’s transportation concerns. It’s no secret that the transportation industry is pushing ahead into the electrification of all major vehicle fleets. Based on numbers from the European Automobile Manufacturers’ Association (ACEA), battery electric vehicles more than doubled their share of new car sales across Europe in the second quarter of this year. Meanwhile, the U.S. wants to make half of new U.S. automobile fleets electric by as early as 2030.

However, as the electrification of transportation continues to progress and EVs become more prominent on city streets, there is a crucial factor that must be considered: Charging. While EV chargers are starting to become more readily available and e-scooter, as well as e-bike sharing operators do have some charging stations or battery swap procedures set in place, there is a new obstacle, which is achieving long-term sustainability. It’s impractical to have a charging station at every popular street corner for each e-bike, e-scooter and vehicle, respectively.

The answer is simple - Multimodal Charging. PBSC’s multimodal e-charging station is a docking and charging solution that works for e-bikes, e-scooters and, soon, even electric cars. By adding a patented triangular device onto the frame of e-scooters and e-bikes, no matter the operator, they can become compatible with the same Smart Stations. This allows cities to strategically position single stations that will be able to accommodate all three electric transportation options. In the future, multimodality will be essential to maintaining the sustainability of completely electric fleets of cars, bikes and scooters.

Are you looking to become a local operator or bring Bike Share to your city?

PBSC E-Bike Sharing Schemes in 15+ Cities Around the World

BIKE SHARING MADE IN MONTREAL