In summer 2020, our electric BIXI bikes in Montreal became a staple of our bike share system. Here’s how.

Montreal is Canada’s second-largest city, and the largest Francophone metropolis in the Americas. With its diverse heritage, Montreal has flourished as a recognized center for artists and creative industries. It is also a leader for sustainable mobility and intelligent transportation.

During the summer of 2020, the city crossed an important milestone in terms of micromobility.  A pioneer in the world of bike sharing, Montreal became one of the first cities in North America to launch a large-scale e-bike fleet, when it partnered with PBSC to launch 1,000 E-FIT bikes. The electric BIXI bikes in Montreal have been extremely well-received. with Montrealers, in a poll conducted this fall, the E-FIT scored over 95% in satisfaction rates for ease of use, maneuverability, and overall experience.

Electric BIXI Bikes in Montreal : The Future of Micromobility

Serial entrepreneur and Chairman of the Board of Directors of BIXI, Alexandre Taillefer knows the future of micromobiliy is electric. “Electric micro-mobility is shaping a new generation of urban transportation, whose practicality, speed, economy and respect for the environment are just a few of its many advantages. It’s a way of getting around the city that meets the concerns of sustainable development, while meeting citizens’ expectations” he said at the launch of 1,000 electric bikes in September, a collaborative effort between PBSC Urban Solutions, the city of Montreal, and BIXI. 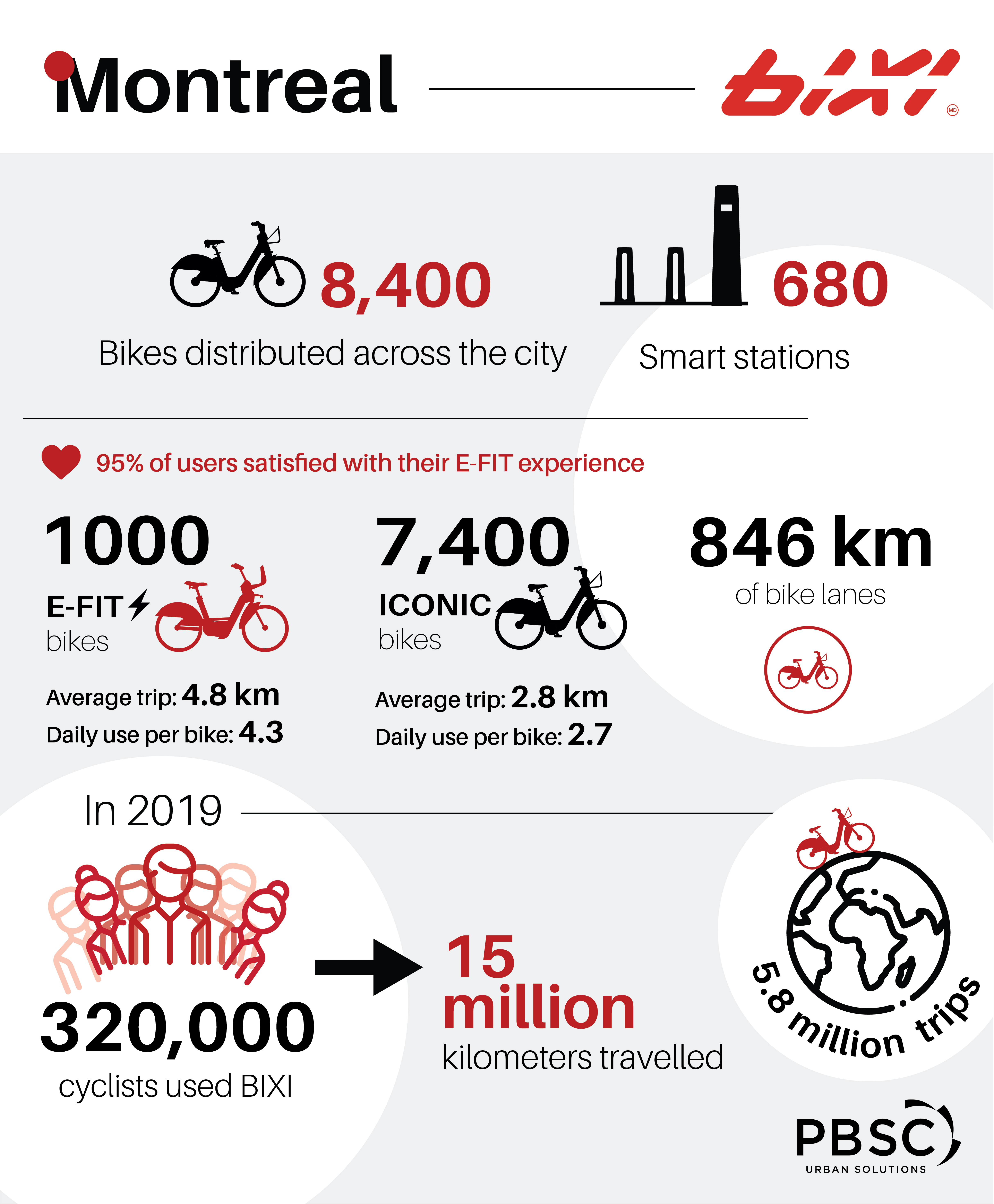 7,400 ICONIC bikes make up most of Montreal’s fleet. The award-winning design was a natural fit. With a sturdy and durable frame, the bike performs well on Montreal’s sometimes bumpy streets. The ICONIC is so well adapted for Montreal, that virtually all the first bikes launched in the city over a decade ago remain in circulation on the roads today.

In 2020, the bike share fleet grows further with the addition of 1,000 E-FIT bikes. It's also only the first phase. With its vibrant blue frame, our electric BIXI bikes in Montreal are easy to spot from a distance. These electric bikes have a unique light and compact design. They are reliable, user friendly, and theft-proof. They’re equipped with a 250W central motor than can propel cyclists to up 32kmh, for up to 70km.

Deployment of the Electric BIXI Bikes in Montreal

After a successful pilot project of 120 E-FIT during the 2019 season, it was decided the e-bikes were there to stay. Beginning with a major expansion in the summer of 2020, the city of Montreal has given itself the ambitious objective of a 25% electric fleet in the next couple of years. Needless to say, the electric bikes in Montreal have won over the hearts of the residents, who can now cycle from the city’s old port to the famous Mount Royal without breaking a sweat.

In 2020, the electric BIXIs were used 60% more often, and travelled 70% further than their non-electric counterparts. One reporter from the Montreal Gazette who test drove the E-FIT summarized his experience as such: “Despite the humid 24 C, I’m dry. And in a good mood. The e-bike elicits a lot of looks, and I get a taste of what it’s like to drive a Ferrari. An ecologically friendly, very cheap Ferrari.”

Our Network of Self-Service Bikes in Montreal

The network is made up of 680 smart-stations located all over the island of Montreal and the neighboring cities of Laval and Longueuil. In 2020, the electrification of the fleet also came with new smart-stations capable of recharging multiple E-FIT bikes on the spot.

With help from Montreal, our team figured out what it took to create the perfect system. It is by working as a team that we have designed a system that meets local needs and conditions. The program is unique in its kind, as it is entirely removed in the fall and reinstalled in the spring, spending the city’s snowy winters indoors.

The bike-share system is loved by locals and tourists alike, and it shows in the numbers. In 2019, BIXI reported 80% growth in ridership and a 309% growth in sales in a five-year period. This figure has continued to grow since the addition of electric BIXI bikes in Montreal in summer 2020.

With 846km of bike lanes (590km of which are accessible year-round), Montreal ranks consistently high in the Copenhagen index. Montreal is the only North American city to have been featured on the ranking every year since 2011.  The municipal government has also put forth the Réseau Express Vélo – a network of 184 km of protected single direction bike paths that will cross the city – to encourage cycling in a quick, safe and practical way.

After over a decade of history, BIXI has grown to become a key player in Montreal’s transit system and has largely achieved its mission to create an active mode of transportation contributing to the well-being of Montrealers.