Home to only 38,300 Monégasque residents but with over 100,000 cars entering and leaving its borders every day, and over 6 million visitors a year, Monaco’s challenges are quite unique. The principality has decided to tackle them in a way that’s user friendly and in line with international standards. In order to reinvent itself and address the needs of all, it has established the Monaco Smart City initiative. the plan focuses on three main objectives: to build the final links of the city’s transport system, to improve liveability through interaction with residents, and gain more control on urban planning and environmental goals.

One of the key points in terms of mobility is to build a larger robust and reliable network of shared electric bikes for the occasional user. MonaBike is a pillar of Monaco’s Smart City program, aimed at promoting low-carbon mobility. It triples bike-share capacity in the principality versus the previous system, which PBSC was chosen to replace.

Managed by the Compagnie des Autobus de Monaco (CAM), MonaBike has seen growth in ridership since its launch. With an average of 1,200 rides a day, with peaks of up to 2,500 rides a day, the system is a real success. To ensure the well-functioning of its cycling initiatives, and in parallel with its investment in a bike share system, the Principality has also significantly expanded bike lanes to facilitate the use of the MonaBike in the country’s small size. The cities’ vision for the future of The Rock  was perfectly in line with the one of PBSC: “improved mobility that increases quality of life by optimizing traffic during peak hours, by offering more shared, connected and sustainable transport, and by providing better information for users and more efficient interoperability between modes of transport.”. 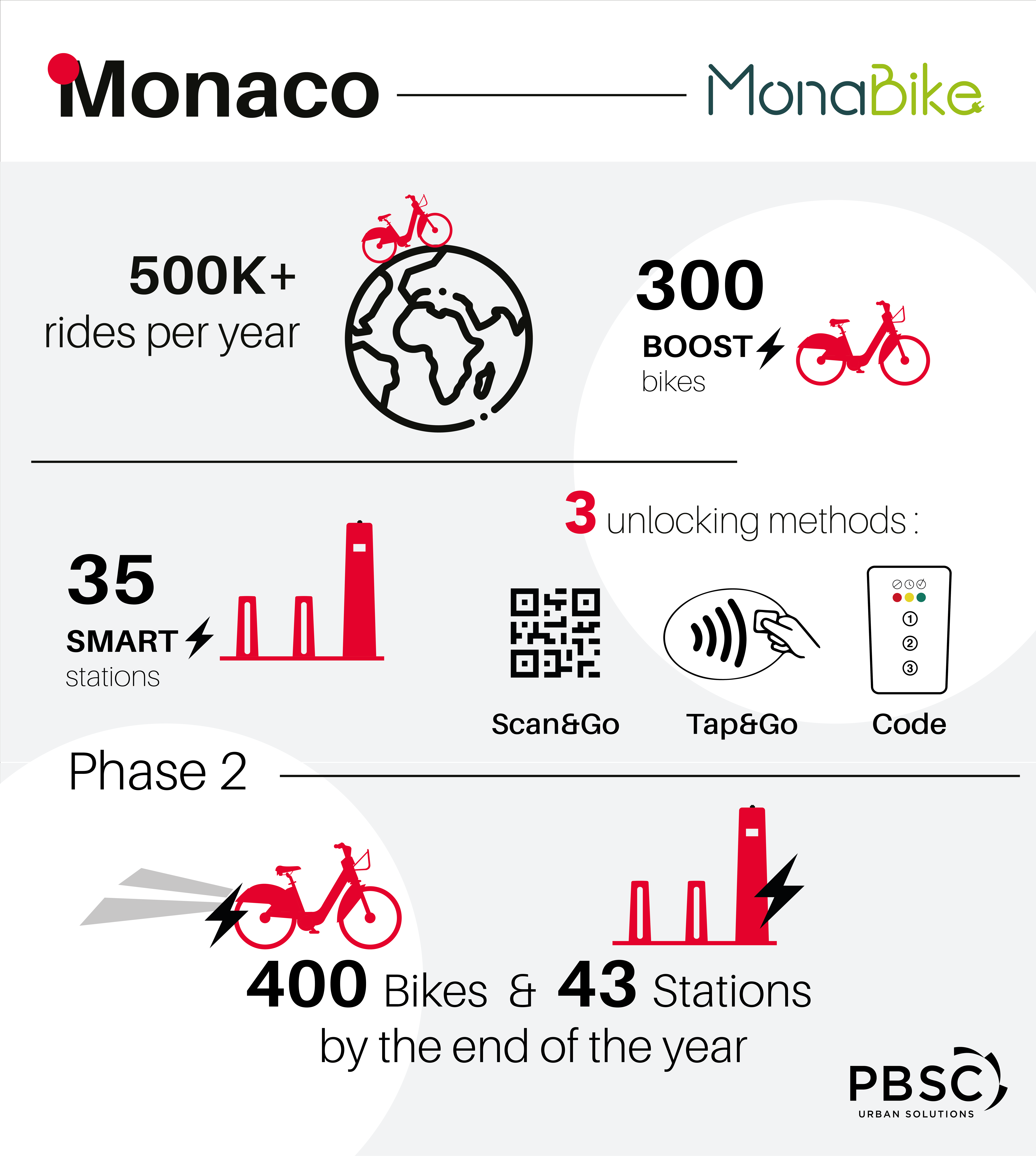 PBSC deployed 300 BOOST bikes to Monaco in 2019. It is because of our pedal-assist technology that the BOOST bikes were selected. Equipped with a 250W rear-wheel motor allows cyclist to go faster than a regular bike, the BOOST is particularly well suited for Monaco’s hilly topography. The electric motor allows cyclist to travel up to 25 km/h with no noise or vibration. To achieve its objectives and vision for the future of micromobility in the city, Monaco opted for a fully electric fleet.

35 fast-charging smart-stations are distributed across the entire territory of the country. The smart-station securely locks the bikes between uses, but they are also used to fast-charge the bikes. PBSC’s technology and innovation allows not only for multiple bikes to charge at the same time, but the smart-station can prioritize the charging based on the battery level of each bike. The smart-stations are designed for user-friendliness and ease; users can use a code, Scan&Go or Tap&Go methods to unlock their bike. With scan&go, a user can use the PBSC app on their smartphone to unlock a bike using the QR code on each bike frame, alternatively, our stations are also equipped with NFC technology that allows users to tap&go to unlock a bike with their transit cards.

15 months after its launch, MonaBike has become a real mobility option for the Monegasques, commuters, and visitors. Ease of use, speed, and enjoyment in their trips has convinced users who now await the second phase of this project have even more mobility options within the respect of strict environmental objectives.

With phase 1 complete a little over a year ago, phase 2 is already in the works. By the end of the year, MonaBike users will have 43 stations, 400 bikes and 650 docking points at their disposal. In the words of Marie-Pierre Gramaglia, Minister of Public Works, the Environment and Urban Planning, the MonaBike initiative advances “an improved quality of life, whether in terms of air quality or traffic as a whole, and also with an environmental approach”.