Britain’s capital is home to 9 million people. It is a bustling, vibrant, and fast-growing city. This smart city has a long history of innovation and ambitious investment in its transit system. London’s Tube, dating back to 1863, was the first of its kind and today 37% of trips made in the city are on public transit. Novel initiatives like the congestion charge are aimed to reduce the heavy traffic flow in the city’s streets and noise pollution.

With many commuters using private vehicles, London was and remains one of the most congested cities in the world. In fact, the average car trip is only 2 miles long, but happens at the low speed of 6 mph. This overcrowding challenge, which has only become more pronounced in recent years, made London a perfect candidate for a widely available and reliable bike share system. City officials jumped on the opportunity and launched one in 2010. Mayor of London at the time, Boris Johnson, rolled out the program, which was later dubbed the Boris Bikes in his honor. This system, now celebrating over a decade in existence, is PBSC’s largest bike-share system.

The city’s first public bike share system was an instant hit from its debut. In the first ten weeks of operation, 90,000 people had registered, and a million rides had been taken on the Santander Cycles. According to figures from Transport for London (TfL), the bikes have been rented an impressive 97,600,000 times since their launch as of 2020. 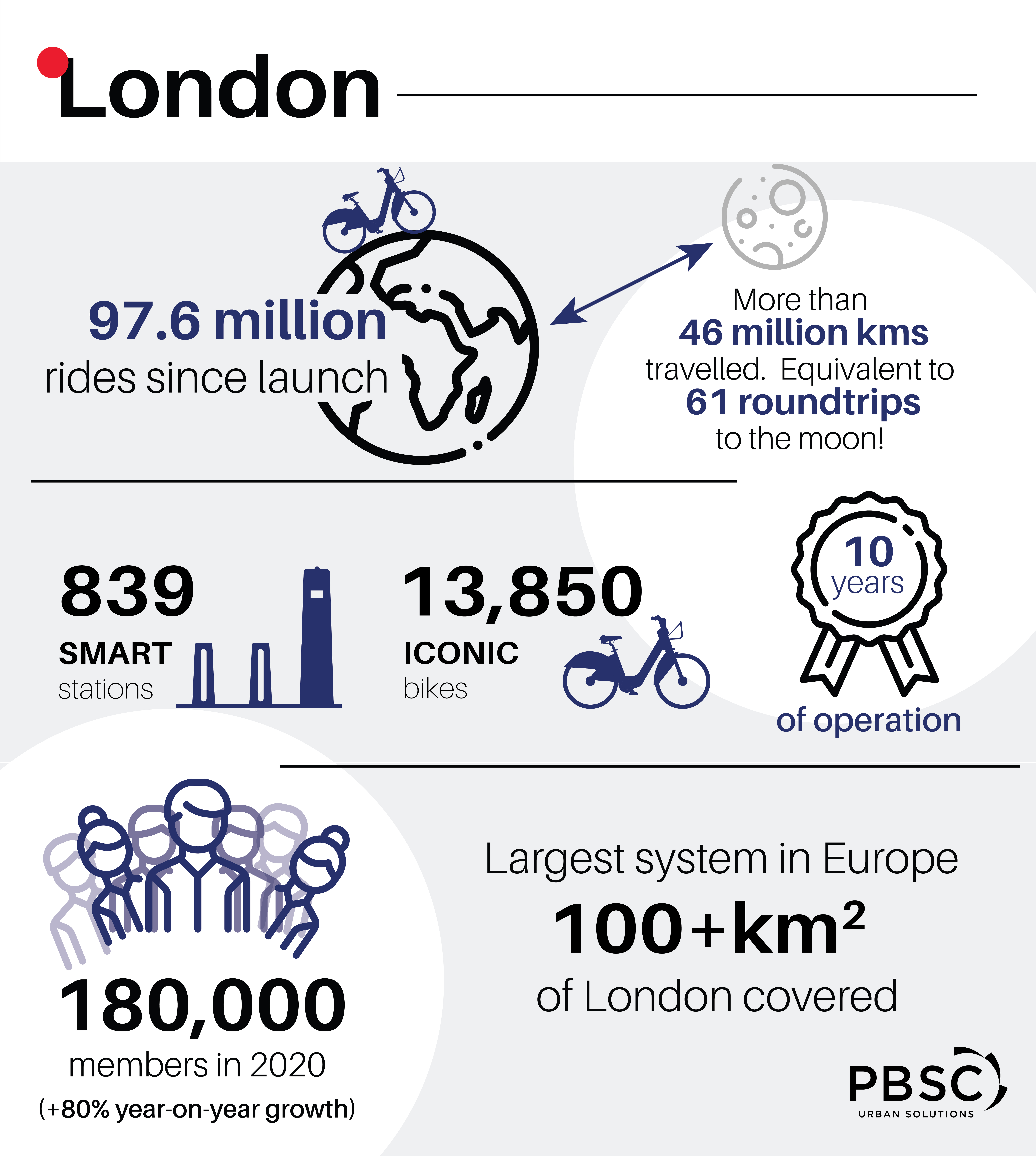 13,850 PBSC ICONIC bikes cycle the streets of London. The system fits right into the city, with its classy blue design and red branding resonating with the Tube and famous double-decker buses. The ICONIC’s versatility and sturdy, reliable design responded to the demands of the Mayor’s office. Similar to many other PBSC-partnered cities, London’s bike share system is custom-made and was adapted for the local climate and road conditions, with wider mudguards and a different positioning for the break. The ICONICs are built to withstand tens of thousands of miles of London streets over a lifetime of 15 years on average, rolling every day through rain, sleet, and snow. Several PBSC ICONIC bikes in London have already surpassed the 60,000-mile milestone.

839 PBSC smart stations are distributed across London. Also adapted for reliability in this notoriously cloudy city, our smart stations are plugged into the city’s electric grid, so there’s no need to rely on solar energy to power the kiosks. The smart station secures the bikes, so they are protected from theft and vandalism, and easily releases a bike when a user enters a 5-digit code from the kiosk or mobile phone.

In London, officials were faced with the challenge of responding to the growing demand for mobility without increasing the absolute number of cars on the road and further worsening congestion. After surveying commuters and a new cycling monitoring strategy, TfL found that cycling is growing strongly and consistently year-on-year. They also found that making the service more accessible helped increase ridership, noticing increased rentals around milestones and the program became open to casual users in December 2010, when the system expanded eastward in 2012 or southwest in 2013. Since 2015, 2,000 bikes have been added and the program continues to grow every year.

Londoners have become attached to their bike-share system. With more bike lanes than ever, cycling is the easiest way for to maintain social distancing while getting around the city. Londoners have already adapted to this new reality, with over 180,000 members in 2020 so far, compared to just over 100,000 members in all of 2019. This summer, the cycles had been rented more than 50 thousand times on 10 occasions in 2 months. To put this into perspective, this magnitude of daily rentals had only happened twice in the past decade.