Colloquially referred to as the gateway to the South of France, and capital of the Drôme region, Valence is a truly charming city. Popular among tourists for its beautiful architecture, it is home to the ancient Cathedral of St. Apollinaris built in the 11th century, pleasant pedestrian squares and shopping streets, and a quaint old city. In the summer, the area is part of the Tour de France route.

Valence Romans Deplacements is the authority who owns, manages and develops public transit in the region. While they also provide access to bus, parking, and car-share, one of the cornerstones or their policy is to improve cycling services and infrastructure.

Libélo is the PBSC-provided bike-share system for Valence. Libélo provides a robust, convenient, and safe cycling option for the 255,000 residents of the territory and is part of a broader strategy to make cycling more attractive to residents. This year, the city has already added 40km of bike lanes and better, safer signaling as part of their mission to create a continuous and secure cycling network.

Partnered with PBSC since late 2018, Valence’s bike-share system has been a real success. The city switched to PBSC from a previous provider, and immediately grew ridership and the size of the system ten-fold. VRD took advantage of PBSC’s experience in over 40 cities and innovative technology to bring a mixed system of electric and regular bikes that are up to the challenge. The success has been attributed to the new Libélo’s ease of use and how well-adapted it is for local needs. Today, Libélo averages over 1,000 uses a day, an impressive figure that is growing 50% year-on-year. 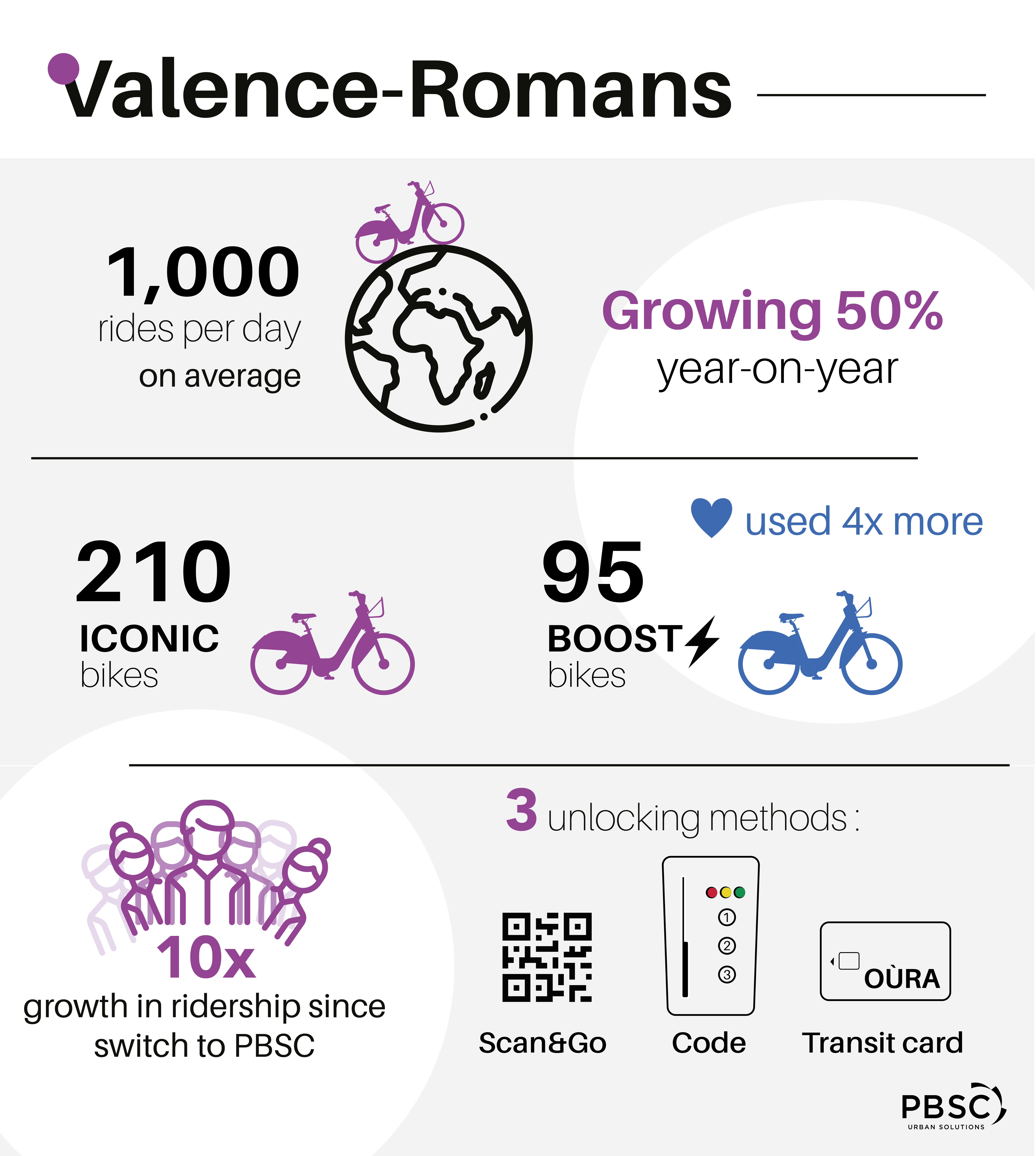 305 bikes make up the entire Libélo system, 210 of them being the PBSC ICONIC bikes. This classic model features an aluminum frame and proven reliability, and its robust yet light characteristics make it perfect for most bike trips. The purple bikes come with adjustable seats, reflective wheels and LED lights, for a safe and comfortable ride.

95 electric BOOST bikes are also on the streets of Valence and Roman. These top-of-the-line electric bikes propel riders and at a fixed speed of up to 25 km/h for up to 60km of autonomy. Equipped with a 250W rear-wheel motor, and a built-in rechargeable battery, going up a hill with these pedal-assist e-bikes is a breeze. This makes the BOOST particularly well suited for Valence’s unique geography, much of the city being built on a series of plateaus on the banks of the Rhône river. Making up almost a third of the fleet, the BOOSTS are truly loved by the Valentinois. Libelo cyclists use the BOOST bikes on average four times as much as normal counterparts.

45 smart-stations are strategically placed in Valence, Romans and other adjacent areas in the region. Some of these stations are also fast-charging stations that act as power-hubs in the network, automatically and efficiently re-charging the BOOST bikes between riders. With ease of use being a priority for Libélo, three user-friendly bike unlocking methods have been made available: Scan&Go, code unlocking, and an integration with the local transit cards.

Only years into the partnership with PBSC, Libélo has already expanded to a second phase, with additional e-bikes entering the fleet. The new Libélo has seduced both tourists and locals, it is quickly becoming an important component of the local transit network. Considering the success of Libelo, future expansions and third phase are being discussed for 2022.