Interested in MiBici in Guadalajara? Discover our City Series, where we cover the stories of cities that partner with us for their shared micromobility needs. Join us as we deep dive into how our technology and innovation empowered their bike-sharing systems’ success.

PBSC’s sustainable bike-share solution celebrates its sixth anniversary in Guadalajara, Mexico! It has become part of the pulse of this vibrant, forward-thinking city. Operated by BKT bici pública, the successful system—called MiBici—confirms Guadalajara’s locals’ passion and openness towards this healthy, efficient and eco-friendly form of micromobility. It also confirms PBSC’s excitement about creating and customizing urban bike-sharing solutions for each city’s unique needs and infrastructure. A true urban mobility city, Guadalajara recently built more than 113.36 kilometers of new bike lanes!

Resonating with culture, this modern capital of the State of Jalisco is known for its international tech industries. It stands out as a global research and development centre of new technologies. (It’s also full of history and is where tequila and mariachi were born.)

Guadalajara holds the distinction of being Mexico’s second-biggest city. It is also the tenth-largest in all of Latin America. About 5 million locals reside within its metropolitan area. In fact, Guadalajara’s forward-looking population was a perfect fit for the State of Jalisco to ask PBSC to put in place a bike-sharing system.We brought our system to Guadalajara to give the citizens a sustainable, innovative alternative to urban mobility, in harmony with the city’s existing mobility plan.

In December 2014, MiBici’s launch introduced to Guadalajara’s downtown area a fleet of 1276 robust, comfy ICONIC bikes and 122 Smart Stations. Five years later, with 2925 ICONIC bikes in circulation, the system has grown to operate in three municipalities of this thriving Mexican metropolis: Guadalajara, Zapopan and Tlaquepaque.

MiBici also consists of 280 Smart Stations. All strategically placed in different areas of the city to improve the fluidity and flow of commuters. These multipurpose, solar-powered Smart Stations are theft-proof, securing bikes and protecting them from vandalism. BKT bici pública benefits from real-time information transmitted by the Smart Stations to manage the system and monitor usage trends. This data helps balance the fleet and stock up those Smart Stations with less or more bikes at different times, depending on need and other operational factors. 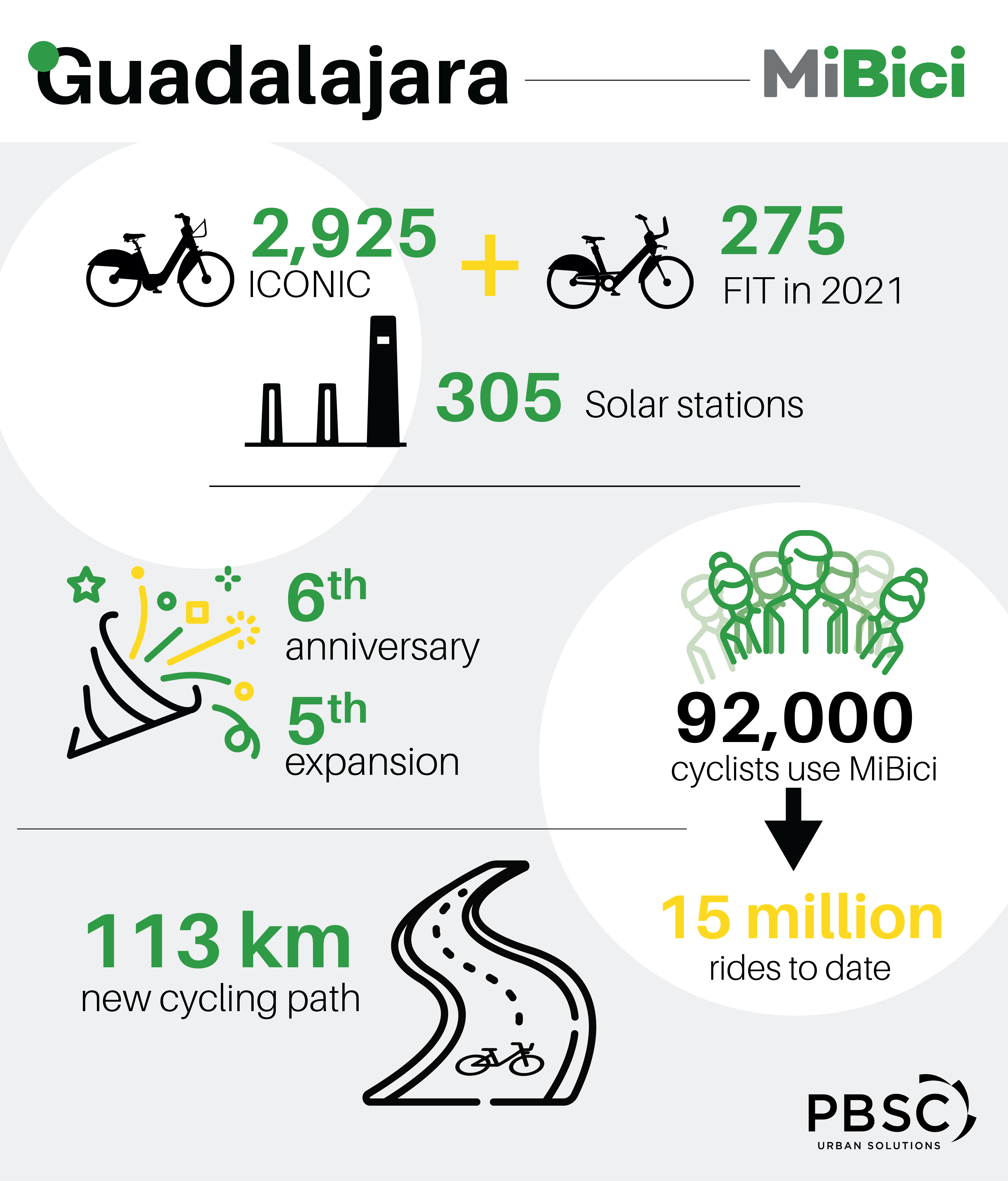 In 2021, another expansion (the system’s 5th!) will unleash 275 FIT bikes and 25 Smart Stations into the system — always integrated with the city’s transport networks. New features coming soon will include a new QR code to rent bikes, revamped app, and website!

So far, it’s worked like a charm. With 92,000 registrations, residents and tourists have used the system for 15 million bike rides. An averaging a rate of 5.5 rides a day per bike. A steadily growing number of happy users and the fleet’s timeless sustainability are living proof that PBSC’s bikes are perfect for Guadalajara’s picturesque streets.

Indeed, skillful management of operations has assured the success of MiBici in Guadalajara. The future of bike sharing in Mexico shows great promise. PBSC’s customized, sustainable solutions are there to meet the urban micromobility needs of this modern country and discover its exciting potential to embrace the bike-sharing movement in its dynamic cities!